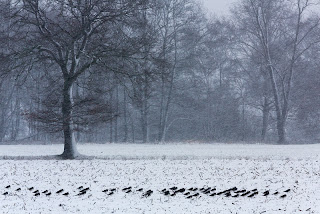 Snow was predicted and snow was what we got. My neck of the woods received a large amount of snow, and me and my fellow photographers gratefully and willingly accepted it. When I got out in the early morning a thin base layer had just formed on the streets and from then it did not stop snowing until way into the afternoon. I again teamed up with Gerard Schouten and together we had a very pleasant, long day in the field. We tried landscapes, close-ups, abstracts, flash photography and searched for birds and mammals. We tried every single country lane looking for Roe Deer and found only two of them in a distant field. But in white-out conditions, they look much better smaller in the frame. So I was happy with the result. I even came across a Red Fox, that suddenly appeared in view when I was photographing a forest footpad. Unfortunately, I had mirror lock-up engaged, which, together with a 2-second timer, made me miss this great opportunity. It still was a nice experience, because I hardly ever see Red Foxes over here.

On the way to another location, we found a flock of Lapwings (Vanellus vanellus; Kievit) enduring the snow flurry with their heads into the wind. Later on, we spent some quality time with a large number of Wood Pigeons, Stock Pigeons, Crows, Chaffinches and Bramblings that foraged on the last edible remains of what once was a cornfield. All in all, we managed to sort of control the restlessness that usually comes with a day of snow. Because everything looks so much better with a layer of white powder on it, it is easy to loose concentration and focus and rush after every possible subject, only to end up with a card full of mediocre images. Now, the snow has gone as quickly as it appeared, and I am already looking forward to the next flurry. Fingers crossed it will be on a Friday again.