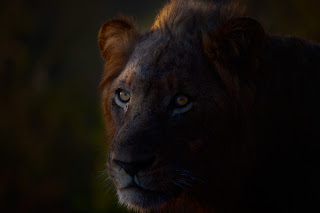 A safari trip to South Africa of course would not be complete without sightings of the undisputed king of the savannah: the Lion (Panthera leo, Leeuw). Mostly, we came across lone male Lions, only on one occasion did we see a larger pride. This pride had killed a huge Buffalo in the morning and when we found them, they had just finished lunch. A very interesting thing happened when the rest of the Buffalo herd came back to the scene, chased the Lions from their kill and took an hour to say goodbye to their deceased friend. The Lions did not dare to come anywhere near the carcass, except for one bold male. He approached the carcass, but some of the larger Buffalo immediately attacked and the Lion had to run for his life.

He ran right in front of our vehicle, a very memorable moment! He laid down on the other side of the road and kept a close look on the carcass. I captured several portraits of him staring to his trophy and rivals. Because the sun was setting behind the Lion, some of the warm light spilled through his manes. By underexposing about two full stops, I got a much more dramatic image than the straightforward portraits I had taken only seconds before.