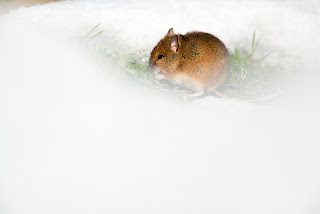 Still lovely winter weather, but not as much time this weekend for photography and the little time I had was dedicated to wrong choices. I spent the morning at the local fishing ponds. Now of course they were frozen, so I did not expect a lot of waterfowl, but I had hoped for foxes or bitterns (Botaurus stellaris, Roerdomp) to cross the ice. None of that happened. No surprise, as I later heard a local hunter has shot several foxes in the small reserve this winter only. Sick b*stard. I did find a sleeping Common Snipe (Gallinago gallinago; Watersnip) among the reeds close to one of the few tiny holes in the ice. I spent an hour on my belly on the ice, waiting for it to wake up and start feeding around the open water.

Never happened. After I had slowly melted my way into the ice, I was cold and wet and left the scene. On the way to the car, I felt watched, held my step and just prevented my snowboot from giving this Wood Mouse (Apodemus sylvaticus, Bosmuis) a hefty concussion. It was nibbling from the small patches of grass that the snow had not covered, not impressed by my presence at all. Only when I got close with the macro lens did it decide to take a run for its money, but only a meter or so at a time. After a few more shots with the long lens I left it alone, so it could stock up on energy undisturbedly. At least one creature that’s happy with the active foxhunter I guess.

The afternoon was spent in the hide, hoping the buzzard would come for the bait. We had placed an observation camera at the scene earlier and the card was full with movies featuring one or two buzzards and even a Polecat (Mustela putorius, Bunzing). With high hopes, I sat there for 3 hours (at least not as cold as last week), only to photograph a Carrion Crow (Corvus corone, Zwarte Kraai) in gorgeous light. A small consolation. Next weekend will probably be dull and wet, let’s see what to photograph then.