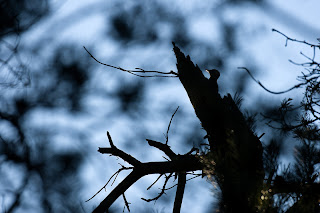 Temperature just below zero, clean and crisp air and the day off, that’s how I like it. I went for a walk in the local forest just to see what would cross my path. I found some nice ice structures as expected, enjoyed being out in the woods alone and sat down every now and then for a cup of coffee and some well-needed rest (walking for miles with every single piece of gear you own gets heavy after a while). During one such coffeebreak, I heard the telltale sound of a Great Spotted Woodpecker rolling on a dead tree stump. I had heard many of them during the course of the morning, but this one was pretty close.

Actually, it was right above my head. I carefully crossed a small track and set up the camera, pointing upwards in a steep angle. I had to focus manually because of the canopy between the camera and the woodie. There he was, a silhouet with just a tiny bit of sunlight hitting his bill. I took a few frames and went back to the still hot coffee, satisfied with the moody image that just presented itself to me. Sometimes, it can be easy.