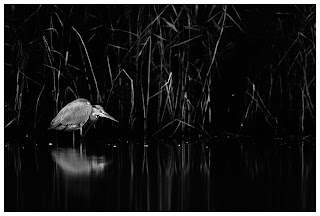 A good friend told me about a small body of shallow water, that appeared to be a good spot for waders. He had shown me some wonderful images of Green Sandpipers and offered me the opportunity to give it a shot. Since the fungi are currently in bad shape (we need rain!), that was an offer I could not resist. So I went over and spent several hours lying on the cold and wet ground, peering through a small hole in a screen made of reeds. The first two hours went by with only a Common Moorhen foraging amidst a distant reedbed. The light was not particularly beautiful, so not a scene worthy to photograph.

Then all out of a sudden came a Great Blue Heron, that landed about 4 meters from my position. Somehow it sensed my presence and flew off to the (not so) far shore within seconds. It stayed there for the next hour, and I could photograph it searching for a kill in all kinds of positions. A bit far away, but because there was hardly any wind, the reflections were very nice and then it pays to have the subject (which is now effectively double the size) a bit smaller in the frame. I liked this photograph best, in which the Heron to me resembles a true villain, thinking about its next bad move and next kill to make. Because the heron’s blueish colors contrast heavily with the yellows and greens of the reeds, I knew I could create a very nice and contrasty B&W version. It looks good in color too, but the B&W version provides a dark atmosphere that suits the villain much better.

Oh: no Sandpipers or other waders showed up, though I did hear the characteristic calls of birds common to reedbeds.