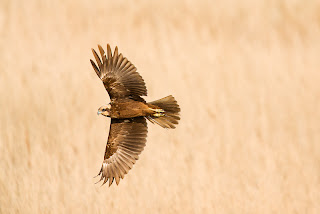 A different environment for a change. The (elongated) weekend was spent in the coastal province of Zeeland. We had a wonderful little holiday at a pleasingly slow pace with lots of visits to the sea and beach and numerous stops for coffee and fingerfood.
Of course I brought the camera, as I knew the area features prolific birdlife, many species of which cannot be found in the area I live. Except the long lens, I also brought the wide-angle and my filterset, just in case the weather would be stormy, and no good for bird photography. We were lucky with sunny (but at times very windy) weather, so all I used was the 500mm.

I spent two evenings at a nearby site where a number of Short-eared owls (Asio flammeus; Velduil) use to hunt. Normally, they leave for their breeding grounds in the far north of Europe when spring arrives. Now, halfway April, we still counted at least four individuals hunting the marshy areas along the dike. An amazing sight to witness, these silent hunters gliding the air, peering yellow eyes constantly focussed on the possible presence of voles. Almost angel-like when beautifully backlit by the setting sun. Both my wife and little daughter were amazed too. Lets hope the fact that they are still around can be accounted for by them liking the area so much that they will eventually breed there.

One early morning was spent at a site near our accomodation where I had seen Marsh Harriers (Circus aeruginosus; Bruine Kiekendief) hunt in their typical swaying manner, wings in a broad v-shape, the previous afternoon. After a while, I came to the conclusion that the not that big reedbed was inhabited by no less than two pairs of Harriers, both very busy building a nest. One of the pairs had trouble with the meaning of the word ‘territory’, so a lot of chasing rivals was going on. The males were still constantly flying on and off with nesting material. I also witnessed the spectacular courtship behaviour, when a prey is transferred in mid-air, the female flying upside-down for a moment. The courtship was followed by several mating attempts. Too far and behind the reeds, so no x-rated photos to share. When these birds hover low over the reeds and bodies of water, all other birds either alarm or flee for their lives. Rather understandable, the literal translation of the Dutch name for these graceful arial acrobats being ‘the brown one who steals chicks’.

I should end this travel story with the statement that I am rather proud to have achieved several decent flight shots of both the Harriers and the Owls, given the fact that I was severely handicapped by the almost absent AF and the slow 3fps rate of the 5D Mark II.