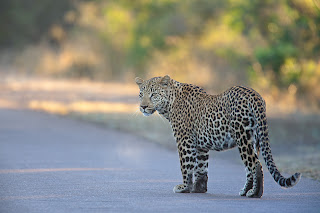 Out of Africa again, unfortunately.

We had two wonderful weeks in the Kruger National Park and were lucky enough to see all of the Magnificent Seven (Elephant, Rhino, Buffalo, Lion, Leopard, Cheetah and Wild Dog).
Most memorable was the sighting of a Lion (Panthere leo, Leeuw) pride at a Buffalo (Syncerus caffer, Buffel) kill. A huge herd of about 70 Buffalo came back for the funeral and chased away the mighty Lions from the carcass. Only after an hour or so, when the herd had moved on, did the Lions dare to appear and feast again. Very interesting behavior and a privilege to be there and watch it from the front row!

Most meaningful to me was the sighting of two Leopards (Panthera pardus, Luipaard) in and near a sausage tree. I had craved for a daylight Leopard sighting since my first trip to Africa in 2002 and never got to see, let alone photograph, one. Slowly, the elusive Leopard had become the main frustration in life. I am happy that the frustration has finally come to an end and in addition, I am even happy with the photos I got. I like the backlit steam of breath coming from its powerful jaws. The only thing is, I now have a taste for more. Guess Africa will see me coming back again (and again, and again).