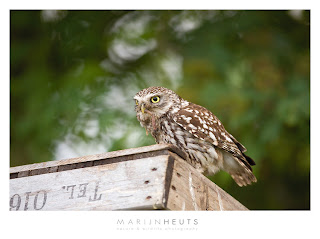 Gone with the Wind, vaporized into thin air, fled from family life, written out of the show. Or a victim to traffic (highly unlikely),  predated by a raptor, captured by a fat housecat? We’ll probably never know but the fact is that I have not seen the male Little Owl since last Friday. I spent two consecutive (very) early mornings in the hide and only the female was busy gathering a meal for the four rapidly growing youngsters. If the male has really disappeared for good, whatever the reason, she’ll have to cope with raising the owlets on her own, which is a daunting task for sure. The good news is that the male had never been the most active of owls when it comes to bringing home the bacon, so his small share could possibly be missed. The bad news is that the female has a hard time catching enough earthworms for four owlets. Yesterday, she only brought 3 in 3 hours. Of course we do not know what happens during the dark hours of the night, but I would not be surprised if not all four chicks make it to fledging.

I have tried to take over the role of the male by offering mealworms, earthworms and dead mice but so far the female has not shown the slightest interest in any of these free offerings. A little arrogant and not really smart. If this remains the status quo, we might have to revert to offering the food directly into the nesting box and hope the owlets are willing to bite. Photographically speaking, the disappearance of the male is a disaster, as he was the only one of the couple who was willing to pose for me. The female just flies directly into the nesting box and into the distance afterwards. I hate it when long-term projects come to a sudden end without me being the one to make that decision. But for now, fingers crossed that (some of) the chicks make it into adulthood and that the female knows how to seduce a new male into her territory. Or maybe the resident male soon returns from his springbreak. Wishful thinking maybe, but who knows. Above is the last photo I captured of him, when all was still well.