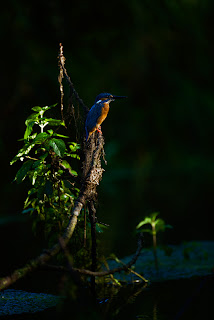 No time for photography with a newborn in the house, so here’s one from a week ago. Together with a friend, we found a place along a local stream where a male Kingfisher would often perch for a while to wash, preen and rest. The spot was very difficult to access with dense reeds and a steep ditch to cross. We spent some time to create a small trail and bridged the ditch. Next step was to exchange the ugly existing perch with something more photogenic. Already on the first stint with the camera, a few days later, the Kingfisher came to check out the spot several times within an hour. He did not like our perch as much as I had hoped for, I guess it was too thin. Instead, he used some driftwood that had surfaced over the previous days because of rapidly decreasing water levels. Not a bad looking spot actually, but the light was already getting harsh. Fortunately, the light was also very directional and I knew that by severely underexposing the shot and some contrast work in Photoshop, I could create a moody image.

The nice thing when you spend many hours with a subject and a specific location, you get to know the individual and its behavior. This male would catch goldfish in an adjacent pond, fly towards the nest (at which I have photographed before) for delivery, return flying low over the stream checking for rival kings, dive, wash and rest for a minute at ‘our’ throne, check out other thrones on nearby ponds, chase rival kings and wannabe kings (repeat if necessary) and return to the goldfish pond. I have witnessed this sequence several times, and even when sitting underneath my camo cloth at our spot, I know at what stage of the sequence the Kingfisher is, just by listening to the telltale calls, splashes and plunges. Wonderful! The sequence lasts some 15 minutes, so I know almost exactly when to activate myself and the camera for the next chance for a shot. The last brood of the season must have fledged by now (judging from the size of the goldfish that were delivered last week). Let’s see how that changes the sequence. With each fledged brood, there will be additional wannabe rival kings to chase, so this game of thrones will definitely continue. Hopefully I’ll be there to photograph the Kingfishers. Already I am dreaming about my first decent Kingfisher images in autumn colors or a snow-covered scenery. A man’s gotta dream, right?