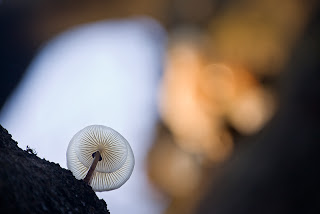 I refound both time and motivation to get out of bed early and out into a foggy morning. Even twice, since these early autumn mornings are hard to resist. The first attempt was a short visit to a local moorland before going to work. I spent an hour wallowing in Wellingtons through a fen before and during sunrise, looking for a suitable composition. I got some decent shots, but definitely no cigar. The second morning, I went to a deciduous forest that is wellknown for its fungus variety. Even though the weather has been ridiculously warm and dry, I found lots of fungi in all kinds of shapes and forms. It can only get better when temperatures drop and the soil gets humid after the autumn rains that are coming our way.

I found a huge dead beech tree that was almost completely covered by Porcelain Fungi (Oudemansiella mucida, Porseleinzwam). Almost, because the closest ones grew some 3 meters from the ground. Up from there, the whole trunk and all major branches were infested by these beautiful glistering fungi. It was difficult to find a decent composition and I could not use the tripod since I had to shoot straight up. I waited until the first rays of the sun hit the fungi in the top of the tree, but not the lowest ones, and used a curvy branch for a natural framing. After a good hour at this wonderful spot, my neck muscles begged me to pack my gear and move on to a less strenous subject.