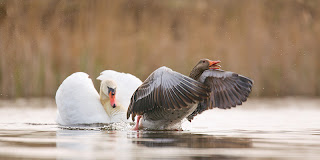 Although the weather forecast wasn’t that good, I had to try out the newly decorated floating hide. So I got up early last Friday and tested the waters. Well before sunrise, I had installed the hide and went up to my chest into the murky water. It took a while before the water temperature made its way through the neoprene wading suit, but when it did, it was cold! All in all, I endured for the better part of two hours. The Great Crested Grebes (Podiceps cristatus, Fuut) that I wanted to photograph kept a safe distance.

They are clearly not used to human presence and will have to become accustomed to the floating thingy. I resisted the urge to move closer to the Grebes and kept still among the reedbeds along the shore in hopes of them getting closer. They did eventually, but not close enough.

After a while, I noticed a family of Greylag Geese (Anser anser, Grauwe gans) consisting of two adults and five little chicks enter the water to my right. They swam perpendicular to my position towards the shore on my left. Halfway the pond, the resident male Mute Swan (Cygnus olor, Knobbelzwaan) suddenly got completely mad. He raised his wings in an act of agression and rushed towards the geese. He attacked the adults and almost drowned the chicks under his weight on the way. He must have chased one of the adults for at least 10 minutes, both across the water and in the air. I was in a good position to try and photograph the action. The 3fps of the 5D2 does not help, but I got some decent shots of the action nonetheless. In case you might wonder: the other adult and the five little ones made it safely to the shore and the next pond. The resident Mute Swan there is a nice guy and kindly accepted his newly acquired neighbours.