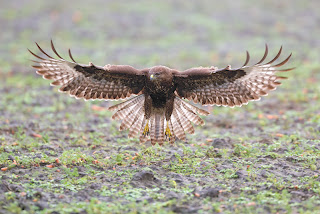 My intention has always been to post once to my blog every week. Sometimes that is logistically not possible, for example on holiday being without an internet connection. Those are usually the only occasions that the blog remains unupdated. Until now. The weather during my Christmas break has been so dismal, that I really did not feel like going out with the camera. No light, no subjects and no inspiration, so no blog update. I went out once and was back home within an hour, I guess I am not masochistic enough to torture myself any longer.
This weekend, the sun finally made an appearance, although it seems so be short-lived and we have to wait for it to reappear in the new year.

I got a tip about a harvested field of carrots that somehow housed a large population of earth-worms. Not that I like photographing these grubs, but all these invertebrates attracted large numbers of Common Buzzards. A week earlier, no less than 14 had been counted on the single field. When I got there last Friday, I saw 9 at most, still a great number. I photographed them from the car while hunting for grubs (the Buzzards, not me). Only one of them was brave enough to get close enough to the car for decent shots. It was very nice to see how they spot an earth-worm some 15 meters away with their fantastic raptor vision. I went back on Saturday and hid myself under a camo cloth, sitting in a forest edge. The idea was to get landing shots with a nice low angle, but I should have known that better camouflage was asked for, like a tent hide. If a Buzzard can spot an earth-worm at 15 meters away, it surely can spot a badly hidden photographer at 25 meters away. So no luck and only some shots from too far away of the 5 Buzzards that were around. The traffic victim Mr. Hare that I picked up when driving towards the field and put out for the Buzzards could not convince them to get any closer. I am sure they had a great meal soon after I left the crime scene. They always do. This probably was the last blogpost for 2012, take care and hope to see you back in 2013!