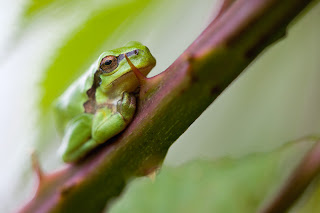 The titel refers to the debut album (1995) by Australian rockband Silverchair. Music I grew up with and recently ‘rediscovered’ and thus added to my iPod. Check ‘m out!

I went back to the inquisitive little foxes, but this time they were smarter than I was. I had put out a little bait and waited for some 3 hours, flat on the belly under a camocloth. Nothing to be seen and with dozens of mosquito bites in the pocket, I decided to take a little walk and look for other subjects. When I returned an hour later, the bait was gone and I think I saw a foxy tail dash off into the reeds.

I found myself back at the same reserve for the release of a new batch of Tree Frog (Hyla arborea, Boomkikker). For the third year in a row, a population of hundreds of juveniles was released into the reserve. This way, a healthy and stable population can be established. That the reserve makes for a suitable habitat was proven by the fact that we found an adult Tree Frog at the spot we were about to release part of the juveniles. They are not really easy to photograph, as the juveniles are only about the size of a fingernail. I had to mount an extension tube and extender to the macrolens in order to portrait the Frog large enough in the frame.