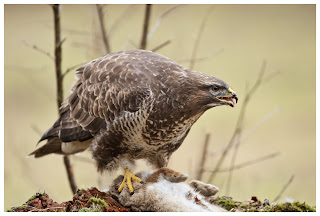 The Harriers appear to have switched hunting grounds and are not seen that often anymore. So I decided to try and photograph the local Buzzard. We have baited it with roadkills for three weeks and it is regularly spotted feasting on the meat.

On Friday, I spent several hours with only a Jay landing on the perch. I could hear the Buzzard though and could even see it through small slits in the canvas. It sat around all day long, without ever coming down for food. Buzzards are never in a hurry and can test your patience to the maximum.

Very frustrating, the more so when the landowner called me to say that the Buzzard was on the bait at the time I was in the car on my way home. It seemed this particular Buzzard favours dinner over breakfast and only shows up later in the day. So another try on Saturday. I figured that if I brought enough food and something to read, the Buzzard would get bored and hungry before I did. I went into the hide before sunrise and waited. And waited. After four hours, suddenly a very large brown bird filled the viewfinder. I took a few shots, which did not bother the Buzzard at all. It was however startled by something out of sight on my far left and took off after only four minutes. I decided to stay and wait for the late afternoon. That almost paid off, almost…After another five hours, an even larger brown bird with a very white belly landed on the bait. Another Buzzard! Within 10 seconds, the resident Buzzard came down as well. The interaction that followed could have yielded some very nice shots. Unfortunately, they decided to fight somewhere else and flew off. At that time, the light had gotten too dim to take any decent images, so I went home. All in all, I spent 19 hours in the hide for a mere four minutes of Buzzard time and only 8 images. Patience really is a virtue.