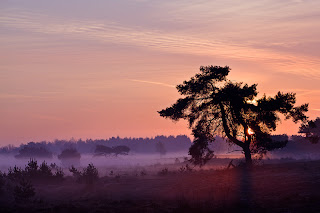 ﻿It had been a while since the last time I got up and out very early. A chilly night had been forecasted with good chances for morning fog, so a good day to rise and shine early.

I decided to revisit the Bluethroats and see if I could photograph them against the sun in foggy surroundings. To keep it short: all of five Bluethroats appeared to be camera shy. They sang their hearts out, but all from a respectful distance and fearfull of my every move. I am happy I spent a few minutes to photograph the beautiful landscape on my way to the Bluethroats, otherwise I would have returned home with empty flashcards.

The fog had also gotten into my head, or so it seemed. After the Bluethroats, I had planned to walk a detour and place an observation camera at a spot that looked promising for May and June. Early morning at home, I had checked at least a dozen times if I had placed fresh batteries in the camera. But when I had it in place and it still did not work, it suddenly dawned on me that I had forgotten to place an SD card in the camera. Damn me! All in all, it still was a beautiful morning: I had a very pleasant stroll and a handful of decent photographs. On the way back, I found a large field with Cuckoo Flowers (Cardamine pratensis, Pinksterbloem), something to revisit on the next beautiful morning or evening. I will probably bring the observation camera again, but only after having checked the presence of an SD card at least two dozen times.