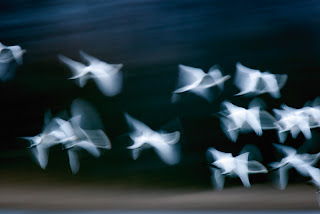 The weekend did not bring the promised frost yet, but at least the weather was acceptable and I had a clear photographic goal in mind.

I spent two mornings with a flock of Bewick’s Swans (Cygnus bewickii, Kleine Zwaan). Their number fluctuates but hovers around a hundred individuals when they spend the night in relative safety in the middle of a shallow body of water. Around sunrise, their whooping calls start to get louder and more nervous when they get ready for take off towards a day of foraging on grassy farmland. The wind dictates the direction in which they take off, but also the side of the pond they use for a floating sleep.

On the first try I managed to get close to the shore without being seen, but the wind was not in my favour. The swans took off in the opposite direction and once they flew over my position towards the foraging grounds, they were way too hight for decent shots. On the second morning, I saw they were at the other side of the pond, much harder to approach unseen. I managed to get closer and this time the wind was more favorable. The fun part is you never now if they take off all at once, or in small groups. At least they make a lot of sound when they prepare to go, so it is possible to get ready for taking the shot.

The one thing both mornings had in common is that the swans took off before sunrise when light levels were low. I had no choice but to use a slow shutter speed and try to pan with the flying swans. Sometimes it works out, sometimes you’ll end with a card full of crappy abstracts. It all depends on the shutter speed and the speed of flight. I had a lot of failures, but the image above is one of the ones I liked. I think it really shows the mystic of their pre-dawn flight and the ghostly manner in which they cross the sky. The only thing missing is that spine-shivering whoop!