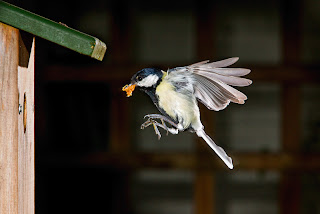 Something completely different this time. I have always wanted to try my hand at high-speed flash photography. Sure, it has all been done before (do a Google search for Stephen Dalton and be amazed), but there is something gratifying about being able to pull it off yourself. The best place to practise would be my own backyard, but somehow the birds refused to accept our nesting box. Until this year. A couple of Great Tits (Parus major; Koolmees) have built a nest and are commuting regularly to and from the box with grubs for their offspring. An ideal situation for high-speed flash photography. The birds use the same perch close to the box for their final descent to the entrance over and over again.

Such a predicatble flight path is convenient, as it offers you a lot of opportunities and good chances of getting the bird in focus. I used a wireless remote control from inside the house to trigger the camera. Warm, cosy and a cup of coffee at hand. Sure, I could have used an infrared trigger, but to be honest, there is not enough room in this corner of the garden for two extra tripods. I must say that it is difficult to get the timing right. There is a small lag between pressing the button and the camera and flashes firing, so most shots featured the bird already halfway inside the nesting box.

I set the ambient exposure manually: shutterspeed at 1/200 (max sync speed of my camera is 1/250, but some banding can appear), the aperture at F11 for enough depth of field and the ISO at 800 to be able to use the flashes at low power (and thus a shorter flash duration, which is important to freeze the bird). A flash at 1/32th power (flash duration around 1/15,000th) is the main light from front camera left and another flash at 1/16th power back camera right (a bit further away) serves as a rim light to separate the bird from the background. The background is illuminated solely by the ambient exposure. With gloomy weather, it is rendered very dark. Maybe next time I try to cover the wooden structure with a cloth and put an extra flash on the background.

It may be hard to see in the jpg above, but even at 1/32th power, there is still some ghosting visible: the flash freezes the bird, but the ambient exposure records it too (all be it vaguely), which results in some vague streaks in front of the bird. This can only be solved by further reducing the ambient exposure. Increasing the shutterspeed is not possible (already at max sync) so the aperture will have to be stopped down to F16. That means the flash power will have to be increased (increasing flash duration too, which makes it harder to freeze the bird), or the flashes have to be placed closer to the subject. Or I could use two flashes from the same position at lower power. Well, I am happy for a first try, now let’s try to get more creative and/or find other willing subjects.