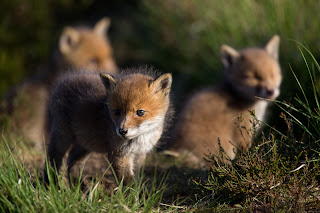 A big relief, as all the trouble of last weeks has finally paid off! I wanted to visit the fox den I had found last week, because there were fresh prints and I had even heard sounds coming from the den. Faith decided otherwise, as I received a phonecall the night before from a ranger friend who had heard from a colleague about a den with cubs. I only received very broad directions, but good enough to change plans and give it a try. So I was out in the field at 5.30 with good hope for success. But: an hour later I had still not found the den. A bit disappointed I decided to search an adjacent, but less likely area before heading home. That’s when I suddenly came across the den.

Prey remnants all over the place and still nice sunlight, so I put down the gear to choose a good spot to sit and wait for a while. I had not even turned my back when the first cub stared at me with a very inquisitive look on its face. We both froze at the sight of eachother and only when I moved to sit down did the cub flea into the den. It took another 30 minutes before it came back to enjoy the sun, but this time with no less than four siblings. I had two very pleasant hours with the five cubs and took lots of photographs and even shot some movie clips. They are still very small (about rabbit size) but will grow quickly without a doubt. I hope to spend lots more time with them before heading to Africa at the end of this month. And oh: later that morning I went to the den I had originally planned to visit. No prints or prey remnants and no sounds, so the phonecall came at exactly the right time!