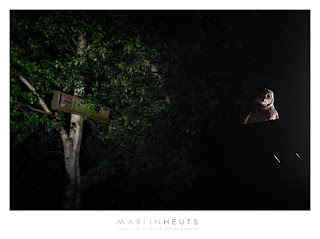 Next chapter in the Little Owl saga, or should I say soap? The male has definitely left the scene and consequences became clear before long. After I had not seen the male on Sunday and Monday, I went back on Wednesday for a quick check on the situation, since I was a little worried. For a reason, since I only saw two healthy looking chicks in the nesting box. That meant two were missing in action. It is well-known that hungry chicks may leave the nesting box early when food is scarce. If that’s what really happened will always remain a mystery, but fact is that we found one dead chick underneath the nesting box in dense vegetation. It may well have been pushed out by its larger siblings, not uncommon when competition for food is fierce. Number four has never been found and has probably undergone the same fate, hidden somewhere in the undergrowth.

I installed an IR-observationcamera to see what the female was up to during the night. When I checked the card after several days, I was relieved to see that a good number of earthworms are brought in every night. Enough to keep two hungry chicks alive. I went back again yesterday and the chicks have really grown a lot! Even so much that the female cannot enter the nesting box anymore, with two heavily hissing adolescents blocking the frontporch all the time. I had wanted to photograph the owls during the night for a long time and thought the time was right to do so. I put the camera with a remote on a tripod, one remotely triggered flash aimed towards the nesting box to show the begging youngsters, and one remotely triggered flash on the female’s favourite hangout. I was hidden in a mosquito-infested tenthide in almost pitchdark. Forgot to bring a torch to faintly light the scene in front of me. Oh the fun. But I got lucky and it took only a few minutes to pocket the intended photo for the day. Now I can start thinking about variations on the theme. I managed to freeze the owl in mid-air in a lot of the shots, but composition and lighting lacked finesse, so that might be the next step in filling my portfolio. Stay tuned.