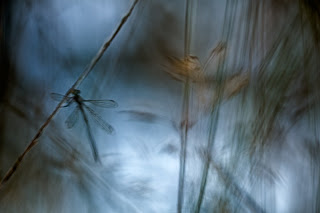 Early mornings last weekend were not really what I had hoped for. Saturday was cloudy and grey with the sun only peeking through later on in the morning. Sunday was equally boring with a cloudless light blue sky. The little layer of ground fog was only a small comfort. Sunsets however cheered me up with amazing pink skies on two occasions, although I enjoyed both from the backyard and without a camera. You can’t have it all and sometimes just looking up in awe is enough.  On both mornings, the initial idea was landscape photography and on both mornings, I ended up with a card full of Damselflies. They were literally everywhere I looked.

Saturday, they were mainly deep in the Soft Rush (Juncus effusus; Pitrus) to shelter from a stiff wind. Sunday, they had worked their dew-covered armored bodies higher up to catch the first rays of the rising sun and I counted hundreds on only a few square meters. It was almost like the ancient Elysian fields, that beautiful and welcoming place where those that deceased could spend a glorious afterlife.  With that poetic state of mind, I easily resisted the urge to take ‘common’ close-ups and instead backed off to portray these magnificent creatures in their Elysian habitat. Also, I got closer and deliberately focussed (manually) just in front of and behind the Damselflies. The resulting images went all the way from wonderful abstracts to plain rubbish, the majority admittedly closer to the latter. I ended up with a chock full round archive, but also a few keepers that are a welcome addition to my increasing portfolio of images from that small but special place close to home.