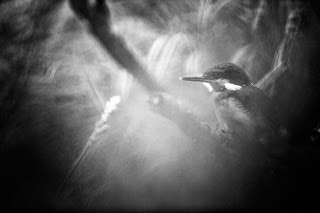 Since our return from Africa, I had not been out with the camera. Instead, I spent the time to repair my floating hide, which had been at its intented destination for more than a year without being used and the winterfrost had made the adhesive crack.

Last friday, I found myself down in the water at 5.30 am. It was only to literally test the waters, but I had great fun and will definately spend much more time there! I now know the depth of the ponds and have learnt that I need to better camouflage the peeping holes, because the grebes, coots and ducks were clearly aware of human presence inside the strange floating device.

Around 8 am, the sun was already high in the sky and I called it a day. Before heading home, I wanted to check out my kingfisher (Alcedo atthis, Ijsvogel) site. Last year, I photographed them at the end of July, when the chicks from the third brood were about to leave the nest and explore the world. Much to my surprise, I found three chicks already outside of the nest, but still close. They must have fledged that same morning, and thus some two weeks earlier than last year. No need to say I rushed back to the car and got the camera. Because the chicks are not used to humans, they allow a relatively close approach without too much camouflage. I tried to shoot through the vegetation for some natural vignetting. A black and white rendition turned out best, mainly because the chicks don’t yet feature the vivid colors their parents have and thus don’t stand out from the vegetation and background that much.