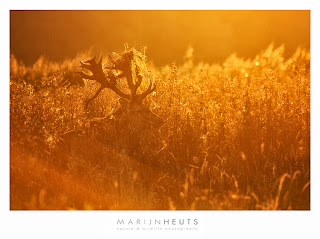 After not having touched the camera for nearly three weeks, I was anxious to go out again. With the Red Deer (Cervus elaphus; Edelhert) rutting season in full throttle, I decided to give them a try. Not in National Park Hoge Veluwe, where on a good day 500 to 600 photographers and other tourists aim for the same apple-fed herd, but a lot closer to home. Since 2005, a small herd of Red Deer have been living in a very large enclosure in a forest that is very rich in nutrients. The Deer have fared very well (without being fed by the hand of man), are in good shape and are (still) waiting to be released into the wild. The release might very well take place very soon, when the ecoducts in our area have finished and are ready to be stepped on by the intended migrants.

During the weekend, many people found their way towards the viewing platform, in anticipation of some dramatic rutting activities. However, it seemed the stags had already determined the hierarchy over a hefty and tiring fight a few days earlier, so not a lot was going on. The stags did bellow, but kept a decent distance from eachother. Fortunately, the runner-up stag came very close to my position and did some antler-gardening, the idea being to increase the apparent size of the antlers by decorating them with grasses. The dominant stag was not impressed and enjoyed a pieceful morning of grazing with his harem along a distant forest edge. Due to very strong and chilly winds, the mist I had hoped for never materialized, but by shooting directly into the rising sun, I could still get a set of photos that to me represent the feel of the cold autumn morning.