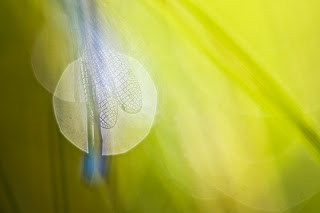 Saturday morning appeared to become the most promising morning of the weekend, photographically speaking that is of course. A wet friday and a cold night are good ingredients for a foggy sunrise. So I went to a large body of water where I had spotted some hundred Lapwings the week before. When I got there, there was only very little fog and only a few ducks were dozing in the far distance. I lay down and waited. The rising sun set the few floating patches of fog on fire and combined with the dark background of the distant treeline, provided for an eerie atmosphere. Beautiful as it were though, it was photographically disappointing because of the lack of a subject.

Just an illuminated patch of fog does not make for a very interesting image, now does it? Time to stand up, put the big lens away and look for other subjects. Not before long did I find several resting dew-covered Damselflies in the high grass (again no Dragonflies, strange enough) and I started experimenting. After a while they were warmed-up and took flight, except for one. A closer look revealed that it was in the proces of being eaten alive! Some sort of larvae clung to the poor Damselfly’s head and was chewing on its brain. Tragic, but at least I had a subject that remained still for a few more minutes. This kind of image can be achieved with backlight, when there are raindrops or dewdrops in the background. The main subject is being mirrored in these drops and by focussing in between the subject and the droplets, you get some sort of an unsharp repetition. Again, experimentation is key here. Some images will work, others won’t. And to some, none of these will probably appeal.