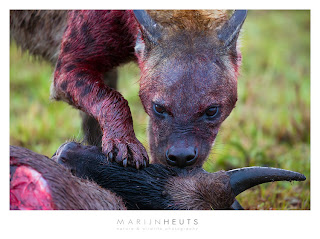 Most memorable moment of the week took place on our very last afternoon drive. When we went out, a torrential downpour came down from the heavens. With the sideflaps closed, it soon became hot and damp in the vehicle and the view through the plastic windows was mediocre at best. The setting outside was gloomy. Zebra, elephant and buffalo bracing themselves against the now diagonal rain, soaked lions lying down in the mud like very grumpy housecats. They seemed dwarfed by the surrounding emptiness for once. After a while, we saw a herd of wildebeest running along a hilltop. Quite a regular sight, so we thought nothing of it. Until a small herd of elephants started running too. They are not easily startled, so our interest rose. Soon, we recognized the familiar gait of a single hyaena between the herd of wildebeest. It was chasing a baby wildebeest! Our guide rapidly drove into their direction, as far as speed was possible, the vehicle sliding in all directions but the right one on the muddy savannah. When tyres have no grip, 4WD does not help you as it’s just two more tyres without grip. When we finally arrived at the crimescene, the hyaena had just taken down the wildebeest. It was still alive, kicking and trying to escape, uttering grizzly moans when the cruel hyaena started to consume its meal -alive. What followed was a very grim event. The hyaena was strong enough to keep the wildebeest down and feed at the same time. Several times we were sure the wildebeest had died, when it again kicked its hooves or screamed for help. Even with one of the hindlegs gone and the intestines lying a meter away, it was still alive, fear levels in the eyes rising every second. Because the wildebeest was still alive, the heart kept pumping blood so the whole scene was rather explicit and bloody, the hyaena soaked with rain and blood. The setting with the grey sky and heavy rain certainly helped to increase the level of grimness. When it finally succumbed and died after a few very long minutes, we were relieved the struggle had ended, as it was not a nice sight to behold. The image above best shows the full story, but without all the blood and gore. As for the other images, they will probably never see the light of day, as they are too graphic, not something the world wants to see. But to me, they are a good reminder of why the savannah is littered with carcasses, bones and grimly-smiling skulls. This is something that happens multiple times every day and although not for the faint of heart, I found the experience very enrichening and would not want to have missed it.

If you want to experience this yourself, why not join me to Masai Mara in 2014? Have a look here (English translation coming soon) for details.