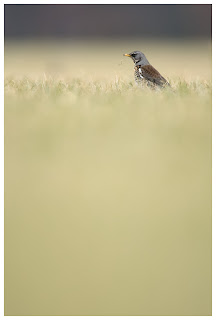 Last Friday, I decided to try my hand at the Shrike again. I spent 5 hours in the hide and could see the bird patrolling the perimeter of its territory. But of course, it was not willing to land on the perch I had aimed the camera onto. Even if it had done so, I would not have been able to press the shutterbutton, as I needed both hands to keep the flimsy hide from being blown all over the place because of a very stiff wind. So again no image: time for a different approach.

So Sunday I set out to a local lake with no specific species or image in mind. The idea was to see if there were any aquatic birds or ice structures to be photographed. The lake was still partly frozen and all the birds (many) had gathered in the center at the only stretch of open water. Too far away. And because of a week of meltdown, the ice no longer showed the beautiful structures and captured air bubbles it had done for several weeks. I did find, however, a very interesting little path with lots of evidence for the repeated presence of fox and wild boar. I’ll definately check it out again.

On the way home, I passed several open fields that were full of Fieldfares. We appear to have an enormous invasion of these trushes this winter. I even found one in my city garden, which is very unusual. I chose a field with only few birds, as more individuals means it is more likely that one is startled and will scare the rest too. After a while, I had sneaked up on an individual. Although I have shots with the bird larger in the frame, this image shows the behavior of a Fieldfare in a much better way: they hop around the grassy fields all day long, and stop every few seconds to listen for any invertebrates moving under their feet.