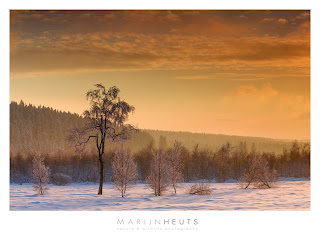 When I went out on Friday morning and yet again was confronted with a grey sky, the plan dawned on me to check on the weather conditions in Belgium. Not too far across the border are the Hoge Venen (Hautes Fagnes, Hohes Venn), a plateau consisting of vast moors and forests. Because of its elevated position, it receives a lot of snow during a considerable period of time each year. I had wanted to visit the area several times before, but somehow never actually made it up there. Fortunately, our modern times have given us webcams and weather apps, and a quick check learnt that there already was a lot of snow with even more expected for the coming night.

I teamed up with Andrew George and early on Saturday morning, we drove off. As soon as we had crossed the border into Belgium, the surroundings started tunring white, and the final stretch into the Hoge Venen was fairytale-like. The fresh snow stuck to the trees in thick layers and wherever we left the boardwalks, we sunk kneedeep in sticky snow. No surprise we had a blast and enjoyed ourselves all day long. Not too common for the area, we had sunny blue skies in the afternoon and stayed around, expecting a blazing sunset. It turned out not too spectacular, but the sunset colors were a nice addition to the more sedate images we got in the morning when the sky was still cloudy.