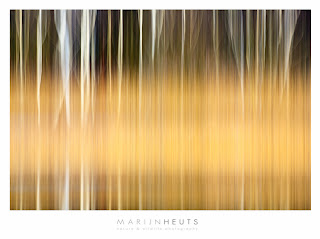 Blurred lines, that was what I was planning on doing over the past weekend. And it was all I had to play with in the end, for all other subjects failed terribly. I spent a good amount of time waiting at a small rainpool on the forest path, where about once a day a flock of Crossbill come quench their thirst. After three hours of waiting, hearing the Crossbills feeding high up in the pine trees nearby, they finally decided that it was time for a fluid session. They gathered en masse in the birch tree next to my car. I anxiously waited for them to come down, index finger on the shutter button. One of them did and immediately fled, the others remained a bit undecided and clung to their safe spot high up in the tree. After a while, they must have thought they had waited long enough, flew off and tried their luck elsewhere. It was only then that I dared to move and noticed another ‘photographer’ who had parked behind my vehicle and thought it a splendid idea to get out of the car and stand next to my vehicle. No small wonder the Crossbills did not dare to come down for a drink. I politely thanked him for killing my opportunity, to which he angrily replied that it was not his fault. He had been there for minutes and the Crossbills did not fly away. No, they did not, but they also did not dare to come down and hence left the scene. He had no clue I was waiting for them to come have a drink, but he did have a few underexposed photographs of tiny red blobs high up in a birch tree. Trophy on the card, moving on to harass another patient photographer. Or so I guess. A second session yielded no other photographers, but also no Crossbills. On the way home I stopped by a small fen and made some long exposure blurs of a perfect reflection. Seems I’m still in a painterly phase of my photographic life, probably for lack of cooperating subjects with an actual pulse.