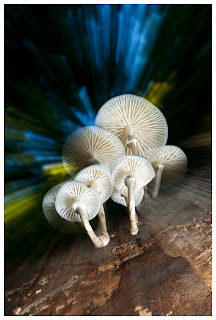 Arguably the prettiest of the toadstools to be found in the beech forest must be the Porcelain Fungus. The hoods are very pretty and shiny (hence their name), the underside of the hood is even more beautiful and a treat to the avid macro photographer.
I had been looking for these ‘beech babes’ in my own area, but the only beech forest around is kept too tidy, with hardly any dead wood on the forest floor. No dead wood = no toadstools. This weekend, we set out to a very old beech forest in the center of the Netherlands with a small group of photographers from our camera club.
It took no more than 10 meters before we had found the first few individuals of my nemesis species. We found many more, some very small, others about 10 centimeters in diameter, some all alone, others in a nice family group. Depicted here is a small group that had found a home about 50 centimeters above the ground on a vertical tree log.
It was all but easy to position the camera on a tripod below the toadstools AND myself underneath the camera.

I used a wide angle lens in order to photograph not only the toadstools but also part of their environment. The resulting images were a bit boring. To add some drama, I chose a small aperture and a long shutterspeed. During the exposure, I zoomed out the lens to achieve the radial blur effect. A wireless flash into a silver reflector provided the light from below and the much needed sharpness on the Porcelain Fungi.