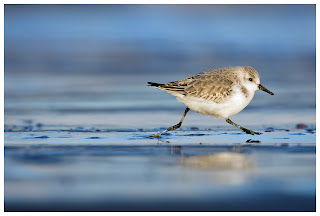 When at the beach with the seal colony, it is almost impossible not to see any Sanderlings (Calidris alba, Drieteenstrandloper). They run along the tideline looking for small invertebrates. The best way to photograph them is to get flat on the ground some 20 meters away in the direction they are moving in. They will inevitably come your way, and when a wave comes, they can even run right towards you, because (strange enough for a wader) they seem to hate wet feet. When I say run, I really mean run. Man, are these little beachcombers fast! I selected the middle focus point but was not able to keep it on the bird.

The bird was not even in the frame! So I switched to the leftmost focus point. Because the bird ran faster than I could follow with the lens flat on the beach, the bird ended up against the right edge of the frame, but at least the Sanderling ended up within the borders of the frame. I think I even like the tension created by the bird running against the frame-edge. It gives a sense of speed, something these white bullets deserve!

What I was hoping for before venturing off to the UK was a sharp image of a running Sanderling with both feet off the ground. Mission succeeded, and even in beautiful late afternoon light!