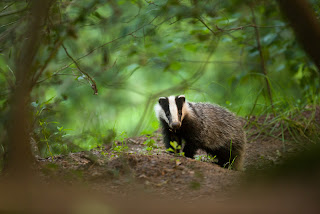 Yesterday after work, I went back to the badger sett. Since it is quite a long drive, I have to be sure the evening weather will feature clear skies before I even go there. With gloomy skies, it is way too dark in the small forest edge for photography. With good weather and thus good hopes, I drove up to the nature reserve where the sett is located. As soon as I opened the car door, the good hopes were gone with the wind (even with calm weather). The farmer who owns the meadow adjacent to the hedgerow was busy mowing the edges of his cow-grazed lawn with a very, and I mean very, loud gasoline-driven lawnmower. Only meters away from the sett, which I guess he does not even know is located there.

Normally, the badgers venture out into the open around 7.30 pm, but not when this much noise is produced nearby. The farmer finished his noisy job around 7.30 pm, but then started gathering the grass with a pitchfork. Although that is a quiet job in itself, the farmer decided to put the radio on 12, and chose a talkshow to listen to. To the badgers, it must have sounded like a group of people were having a very loud conversation only a few meters away. Not good. At 8.15 pm, two badgers finally, and carefully, came out of the sett, but went on a food gathering expedition without first having the usual grooming session. Understandable, since the 45 minutes they normally spend grooming now had been spent underground and the rest of the evening and night are labelled as dinner-time.

Only around 20.45, 5 badgers appeared and spent some time around their favourite play-tree. But no more than 10 minutes, after which they silently went back into the sett. This procedure repeated a few times, untill at 21.45 it was too dark for any photography. The talkshow was still on. I left my 300 mosquito kills at the crimescene and went home. Above is one of the results. I love the natural framing and the out-of-focus leafy pattern.

This was the first time I could test my newly acquired 5D3 on its high-ISO performance. And it passed! The 5D2 was very usable up to ISO 1600, and with some good post-processing even up to ISO 3200. The 5D3 improved by about a stop, maybe more (Canon states 2 stops). ISO 3200 files do show some noise, but very little and it does not degrade image quality at all. Contrast and clarity of the RAW-file are great, and can be further improved in post-processing without any resulting artifacts. I tried ISO 6400 too, and these files are usable after some careful noise-reduction. Especially color noise increases a lot at this setting though. Autofocus is in a whole other league than the 5D2. Even in almost absent light, the camera was able to focus on a badger butt (badger butts have no contrast, in case you might wonder). Another plus of this camera is the silent mode (which I loved on the 1D3 but was lacking on the 5D2). Badgers have very good hearing and I noticed every image taken with the 5D2 made them look in my direction. With the silent mode on the 5D3 engaged, they just went on with their badger business. Great!