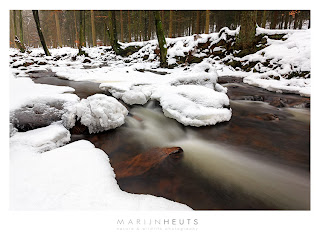 With winter still hanging around just south of our border, I decided to give the Hautes Fagnes another try, but this time another part of the vast area and in the good company of Heike Odermatt. The drive up there was less promising than last time, with a slight drizzle and not a lot of snow in the surrounding fields. Just before we reached our intended destination for the day, the rain turned into snow and our hopes were high. We were the first car to park on the parking lot, and probably the last. We got stuck in the snow, all 4×4 wheels spinning like mad. Some digging, a plaid and a floormat did the trick, but when we got out, it had stopped snowing. Instead, a very dense layer of fog rolled in. The view was very restricted and photographs were only possible with a short lens. Even at only 100mm, the subject was impossible to discern on the resulting photographs. The morning snow had made the footpath disappear and more often than not, we had to guess what side of the bushes the path would continue. We guessed wrong many times and ended up to our knees in the snow. Good fun and good exercise. After a while, we found deer tracks, and knowing that the deer probably know the easiest way around, we literally walked in their footprints. That worked.

After lunch we went to check out one of the many scenic streams in the area. It was difficult to get to the shore and I did not even try to get into the water. With a limited choice of vantage points, it was hard but enjoyable work to come up with something nice. Late afternoon, the drizzle returned which, combined with the melting snow from the treetops, made the snow on the ground look pockmarked and downright ugly. For now, the height of winter seems over also at the Hautes Fagnes. Let’s see if it makes a re-appearance. If not, it might be interesting to check out the fens and streams in spring and autumn again.