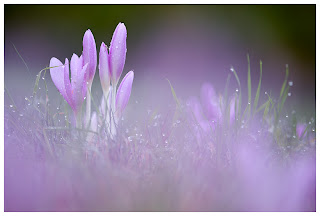 An abnormal silence in the blogosphere from my side, due to a short vacation break with the family in a pieceful cottage with no internet connection. Here’s a catch-up (and backdated) post. Just before setting off for the holiday, I went to a nature reserve close to home which is wellknown for its large numbers of Meadow Saffron (Colchicum autumnale, Herfsttijloos), also known as the autumn crocus for obvious reasons. I had planned to go there and photograph the delicate flowers for several years, but somehow I failed to do so time after time. The flowers are only in bloom for a few weeks in september, so timing is important.

Even this year, I was relatively late in the season, but was fortunate to find many flowers still in bloom. I had to search for a few goodlooking ones though, because a fierce nocturnal and rather windy shower had damaged the majority of the flowers. I got down flat on the ground and used the pinkish purple blob of out-of-focus foreground flowers as a natural frame for the main subject. The 4-stop (!) IS of the new 70-200 allowed me to shoot handheld, even in rather dim light conditions.