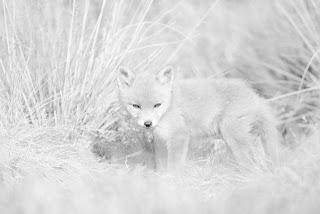 Here’s another image of the single fox pup I found two weeks ago. At this young age, they are cute little angels, still a far cry from the cunning predators they will become at an older age.

I thought a highkey black and white rendition would stress this angel analogy even better. Like an angel in puffy white clouds. With most of the fox and background being a variety of yellow and red colors, the application of a yellow, orange or red filter during the b&w conversion in Photoshop did the trick. The only other thing I did was to increase the black level to darken the nose and eyes and make them stand out more.

As I am writing this, two weeks have passed since I photographed this little guy. I went back last Saturday after our short vacation and spent 4 hours in the very early morning at the den. Although the pile of prey remnants and fox excrement had definitely increased, I could not see any fresh prints in the sand that was still wet from the previous nights rain. Also, one of the most used entrance/exit pipes was covered by cobwebs. Not a good sign. The family has probably moved, or at least I hope so and that nothing bad has happened to them. Too bad the one day I finally found them was also the last day before our vacation. Better timing next year! Maybe I’ll check out the site one more time next weekend, as I can tell you that fox photography can get addictive very quickly.