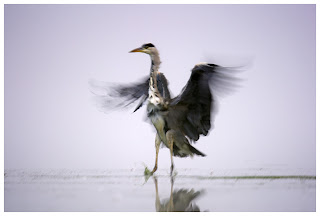 A mere inch. That’s how little the heavy rains of last week have made the water level of the inland lake rise. The direct consequence of the higher water is the disappearance of the mudflats and grassy islands in the lake. Which in turn are (better: used to be) the foraging grounds for waders and Lapwings.

Weather was great for photography with a very dense fog. Clouds obscured the sun, so the fog remained for the full morning. Nice weather, but no birds. Who said a photographers life is easy?

I spent about an hour lying at the lakeshore, with only a few mallards and greylag geese somewhere in the white distance. At least, I guess they were mallards and geese, judging from the sounds I heard, coming from a distant invisibility.

Suddenly, out of this great white nothing, came a Great Blue Heron flying in. It landed right in front of me (still at 46 meters, according to the EXIF). I rattled off at a slow shutterspeed (as I had planned to do pan blurs this morning) and got a few nice ones. The Heron peered into the fog, roughly to where the clicking sounds came from, but clearly could not see me through the dense fog. Good to know I am not the only one with bad vision on foggy and gloomy early mornings. After a few seconds, the Heron decided not to take any chances and disappeared as quickly as it had landed. Again I had an eerily empty lake in front of me, but with the shots bagged, I packed up and went for some macro photography a few miles further.